Fishing Fun at the Fish of the Day migrations

With patch 5.2 they started having Fish of the Day pool migrations. I quite like these areas, and you just have to chat to Ben of the Booming Voice in the Valley of the Four Winds (along the river east of Halfhill) who will tell you where they are each day.  I ask him to show me and he puts a nice little red x on the map.

The prettiest one in my opinion is in Jade Forest, around Sri-La village.  Sprite Darters float around the fishing area, sprinkling their dust around, and the water sparkles.  My daughter loves seeing me fishing there because it's so pretty.  A shame that the Jade Lungfish caught from the Glowing Jade Lungfish pools are for 250 intellect food (Swirling Mist Soup) or 275 Strength food (Eternal Blossom Fish)

My favourite place to fish during Fish of the Day migrations was in the Valley of the Four Winds, near Stormstout brewery.  Brew Frenzied Emperor Salmon Pools are there and that's the fish I use for raids to make Fire Spirit Salmon and Banquet of the Steamer.  I find it funny looking at the Hozen Beercatchers wandering around the edges of the pool, and beer barrels being chucked into the water.

Yesterday the Fish of the day was in Kun-Lai summit, around Shado-Pan Monastery at Master Snowdrift's Pagoda.  I hadn't fished there before so I went to check it out.

Snowdrift trainees are standing around the area shooting ice bolts at the water.  Lucky it doesn't scare the fish away!  And that day's fish was.... hmm, Tiger Gourami!  I don't normally use that fish but it's used for agility food (Sea Mist Rice Noodles) so someone might want it.  I fished up a fair few small pools (Tiger Gourami Slush) and then I turned to the giant pool (Large Pool of Giant Gourami Slush).  These large pools are found at the migrations and are huge and you can fish them for AGES!  I think I got 50-60 fish out of this one. 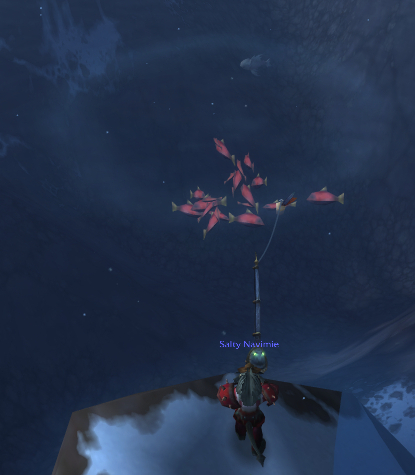 When you finish fishing one of these big pools, Krakkanon appears.  He's one massive Kraken!  He looks daunting with his 20 million health, but he actually hits really softly.  You can solo it, but it will take ages!  And don't be fooled by that elite tag, he doesn't drop anything much except a stack of the fish that you fish in the area (more Tiger Gourami.. yay). 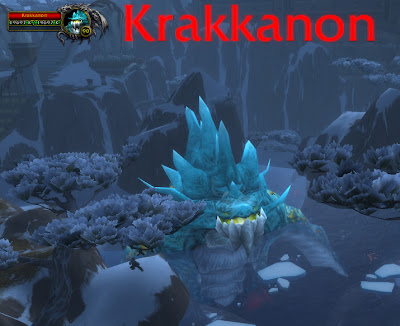 But this pool was special!  Not only did I manage to catch my first carp (Tiny White Carp) from that big pool, but I also managed to get TWO Flying Tiger Gourami.  One I fished, and the other was on the Krakkanon.  The bummy thing is that it's unique and so I hadn't handed in my other one so I couldn't pick up the second one. What a waste! 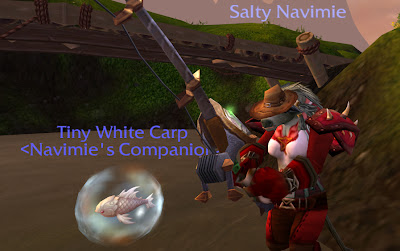 I really like these pools.  I can stand in one spot and fish all day long, not agro any hostile mobs, and get a chance at my Nat Pagle fish as well as the pets.  Good luck to all of you guys with your fishing!