What does Legendary mean to you?

Tzufit, in her usual engaging manner, stirred my sluggish mind with her post When Everyone's Legendary.  And when you read what she's writing, I bet there are a lot of people who think the same.

Remember when something was "legendary"?  It was orange, it was ultra rare, it was amazing to see it, people would stop and stare at it. Back in the old days it was a rare drop + a hell of a lot of work - something only raiding guilds would see, not the ordinary player.  Those MC drops - Thunderfury, Blessed Blade of the Windseeker and Sulfuras, Hand of Ragnaros, which requires a bit of crafting as well (BLAH to Elementium ore!) - I have to say I saw a lot more of these when MC became more farmable in BC/WotLK.  But they were still hard to get.

Then we had the rare drops, the Warglaives of Azzinoth and Thori'dal, The Stars' Fury, which drop from Illidan in Black Temple and Kil'Jaeden in Sunwell Plateau.  These days, also farmable if you want to go there every week.  But they were cool and rare AT THE TIME.  More commonplace now, but they were a badge of pride back in those days, showing hard work and dedication.  But still a bit of RNG to get. 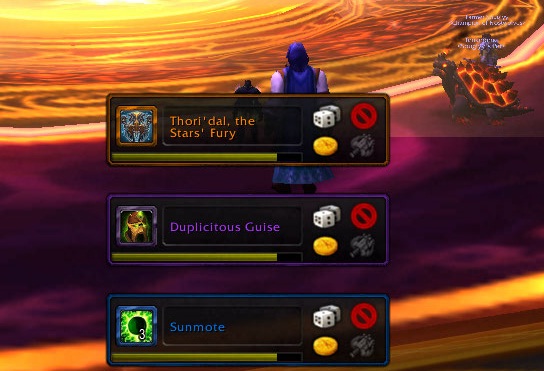 Then came Ulduar and Icecrown Citadel, and their legendaries, Val'anyr, Hammer of Ancient Kings and Shadowmourne, both of which required 25 mans - which tends to imply a guild raid. Shadowmourne had a series of quests and was the first where it required you to do certain parts of each boss to progress through a series of quests.  Moo said it was quite hard.  That was quite interesting, and fun to watch at the end. 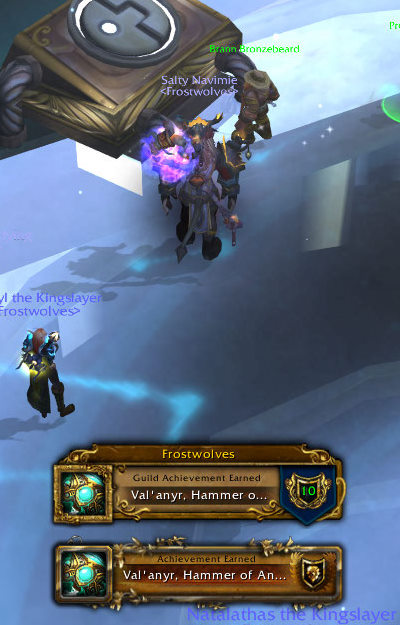 Then we come to the Cataclysm Legendaries - Dragonwrath, Tarecgosa's Rest, which is the Firelands caster staff, which involved multiple steps of a fascinating quest chain and story, which added to the whole Legendary part of it.  Then there was Fangs of the Father, the rogue daggers from Dragon Soul - also with its own epic legendary quest chain.

The beauty of the last 4 legendaries is that they were not only personal achievements, but there was a sense of guild achievement too - we got to see the final part of the quest chains when the legendary weapons were handed over (well, not for the rogue one) and feel like we were all part of something, part of the Legendary chain itself.  There was a great sense of guild pride, and it was a great honour to be selected to be the person to chosen to receive the legendary that the whole guild was going to help you work towards.  Of course, Blizzard helped a lot with Dragonwrath - offering a pet as a reward for all guild members.  Fangs of the Father was more solo, I guess because it's rogues and rogues do things in the shadows and on their own.  (Hmmm.  That sounded a bit dirty.)


(I have not mentioned Atiesh, Greatstaff of the Guardian because I have never seen it and that was TRULY an exclusive high end raider item.  That was from old Naxx and doesn't exist anymore!  It has passed from being legendary into the realm of legend.... a TRUE legendary) 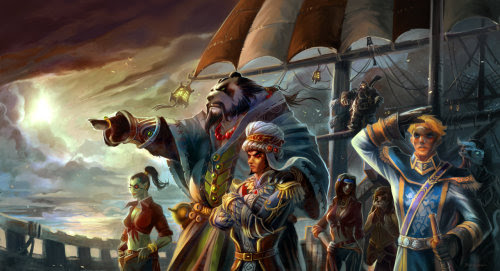 The Legendary quest chain in Pandaria is different to all of these - and I can see why when you look at the why WoW is evolving.  Blizzard is moving away from the guild/friend group focus for doing things - raiding, dungeons, battlegrounds - and more delving into playing with a group of strangers.  It would only be natural progression that the Legendary chain would be like that too.  Also, with LFR and LFD, EVERYONE can participate in raiding now, not just those who are are in guilds and groups of friends.

Me, personally, I have been a bit meh about the whole legendary chain, since I read about it on MMO Melting Pot.  I am up to the collecting valour points part, and I have been lazy with capping valour every week  (though, if I cap Valour this week, I will have completed this part of the legendary chain).  Tzufit put a video of Syndrome from The Incredibles (what a great movie that is!) and that has triggered a whole heap of analogies in my post...

But that movie touched upon that what our society is leaning towards today - where there is a general feeling of unfairness and inequality, and wanting everyone to be rewarded for their efforts.  Like kids running in a race - everyone gets a ribbon, not just the winners, so that the losers don't feel like it's unfair.

"But Dad always said our powers were nothing to be ashamed of, our powers made us special."
"Everyone's special, Dash."
"Which is another way of saying no one is."

But the question here is: ARE we celebrating mediocrity with everyone getting a Legendary weapon at the end of this quest chain?  It's all about gems that upgrade your weapons and there are titbit gem upgrades along the way (as long as you have a Sha-Touched weapon, which seems to be the bottleneck for a lot of people!  RNG!!!) There is still a fair bit of effort required to get it, the quest chain is long.  That still requires a lot of effort, and not necessarily mediocre effort.  And it has a storyline... wait, what is the storyline??  Something to do with Wrathion...


This, perhaps is the clincher, the bit that makes it not feel so legendary for me.  I am sure, for most others who did Legendary quest chains (Dragonwrath, Fangs of the Father, Shadowmourne) they can recall the story that went with it.  The moment of epicness, of BEING legendary, so that every moment of the legendary was exciting.  Am I the only one who feels like the new legendary chain is somehow just an upgraded quest where you can just skim the text to get to the reward?

Or maybe, its because I already have a Legendary weapon.  Having another will never be as exciting as my first Legendary - the feeling of having something that very few people will have, and all the hard work and runs I had to get my weapon.  Of the immense feeling of gratitude to my friends who helped me get it, and who were there run after run after run.

But what about those who don't have a Legendary already?  Perhaps they are very excited to get theirs.  Maybe they are hanging onto every part of the quest chain and reading and memorising the text and the story - just because I'm not really into it, doesn't mean everyone is like me.


Perhaps, what bothers me about it, is that though the grinding of it is done on an individual basis, you still require a group to do a lot of it.  You need to do LFR to get your sigils.  You need at least 3 people to defeat what's-his-face commander.  You need to run the 2 new Pandarian battlegrounds.  And you can actually sit back and let others do the work for you for these legendaries (ie join a big group and do no heals/DPS etc), and I still feel you should use some sort of personal skill to be worthy of these legendaries.  In addition, each part of the legendary is being released with each patch, so you can see that it's going to require you to stick Pandaria out to the end to see the legendary gem that upgrades your weapon to the covetted orange.   If I look at it from Blizzard's point of view, this legendary is allowing you to see ALL of the content they have to offer - the raids, the battlegrounds, the dailies and the factions - AND stay for the entire expansion.  However, once you get your legendary, it will be YAY ME!  And not that feeling of guild pride (Unless the guild has some pact and they all get their legendaries together).


I don't begrudge everyone their legendary.  I think perhaps I am just wishing that the legendary FEELING of belonging and group effort would come with it.  But there is no point in wishing for things of the past, or of things as they once were.  The world is moving forward.  World of Warcraft is moving forward.  I should not be one of those people talking about the good old days.  This is the WoW we play now.

Edit: See what Legendary means to other people on Anne Stickney's article in WoWInsider "What does legendary really mean?"  And she even linked my humble post!
Email Post
Labels: legendary weapon Navi's thoughts