Navispam: An Apple Cider a Day Brings the Mage out to play

You know, you think you read someone's blog and you know a little about them.  Apple Cider Mage is known for her strong opinions for female rights and equality, for starting conversations, sometimes heated ones on controversial topics.  She won a Piggie Award in 2011 for Most Noticed Blogger breakthrough with posts such as "Then and Now" which was one of my faves.


She has had some difficulties with harrassment and stalking in game, and wrote a guide on how to handle it.  I had a great deal of admiration for her, but mixed in with I felt a little intimidated by her.  What would she think if silly old me came to ask if I could take a picture with her?  Would she think "Who is that, and why is she harrassing me?"  We may not always agree on certain viewpoints but that doesn't make me think less or any differently of her, and I hoped she was the same towards me.

But surely she couldn't be like that.  She even visited my blog once, when Dragonray brought Rades to meet me, and I had the hugest squeeee ever, and left a comment.  Since then I had been building up my courage to go meet her.

I was back in my Navispamming mode after the frantic race and exhaustion that Mists brought with dailies and pet battles, and so I sent her a tweet to ask her if she would mind terribly if I came to visit her and take a picture with her.

4 days later I got a reply and I was excited, she seemed to be happy to be Navispammed!  So I got her details and over I went.

There were quite a few of her guildies when I logged on and I asked one politely if Apple Cider Mage was on.  There was a long pause.  Really long.  I was contemplating whether to try another guildie, when the person replied me and said she was on an alt, but she was getting on her main to speak to me.

It wasn't long before ACM sent me an excited whisper saying she was coming to get me!  And boy did she make a grand entrance on one of the gorgeous Cloud Serpents! 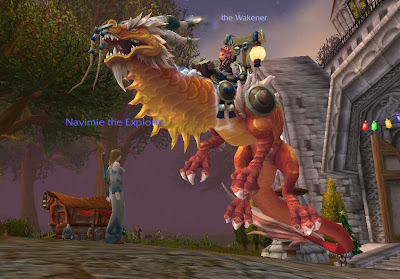 ACM told me she was REALLY excited that I had come to visit, and she had been waiting for this day!  Wow, if I had known that, I would have plucked up the courage sooner! 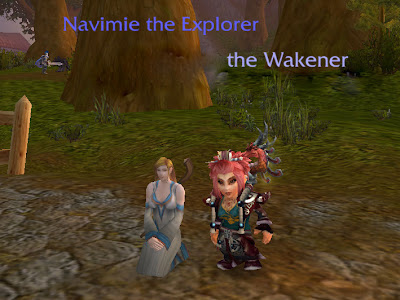 She loves mounts and pets, and she was thrilled to be able to showcase them to me, a most willing and avid admirer of all things collectable. 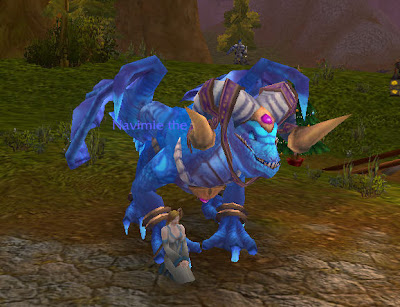 I told her how much I admired her writing and how she stood by her opinions no matter what the lashback, and about how polite and helpful her guildies were.  She said to me that her guild has been really excellent, and is really good with fending off unwanted attention to her and that's why she had been there for years.  In fact, she said, she was the guild leader.

Well!  I didn't know that! I was surprised at first, as I had assumed she had always wanted a less spotlight sort of role in the game and avoid unwanted attention, but when I thought about it, does that really surprise me?  She sounds like someone who likes to steer things in the right direction if things go awry, so being a leader seems natural, really.

So she took me for a ride and we had the usual Cross-Realm Zone dismount which led to my demise.  ACM was horrified but I reassured her that it was a very common occurrence in my Navispams, especially when I was being taken places. 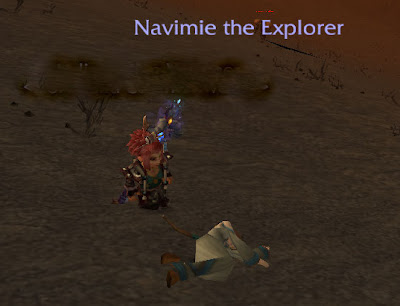 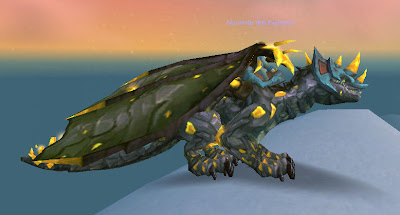 This is where she took me - it was her favourite spot to see the sunset behind Ironforge.  She said she had found this place by accident - jumping as a low level in Vanilla!  I was a little distraught that I couldn't capture it very well on my crappy laptop (I was at work on a lunchbreak) but this is the best I could get. 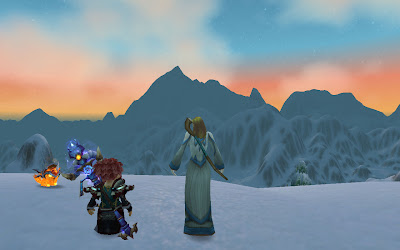 She pulled out one of the awesome trinkets that drops from the rares in Pandaria - Crate of Kidnapped Puppies.  When I saw this, I thought OMG Ancient must get this, it's so cute! 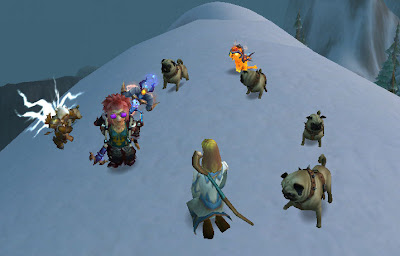 She told me how one day she'd like to write for a popular online publication, and she told me a little about her partner (another thing I didn't realise, and was a little agog) as well as a bit about some people on the server.  Talk about rubbing shoulders with the WoW famous!  She even told me about one time she met Ghostcrawler and then she was passing him on an escalator or stairs and she yelled out "Hi Greg!" and he looked at her a little surprised, and did not recognise her. 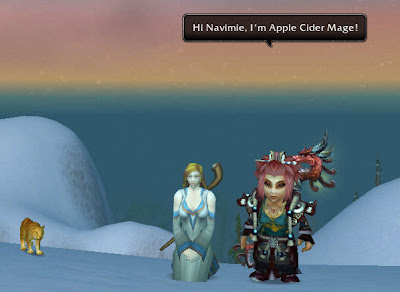 I can't show it here for privacy reasons, but the kitten in the picture above was named after her real life kitty :)  I then showed her my pride and joy of my collection (Mini Tyrael) and she loved him!  I had nothing else cool to show her because she had every other pet I had :)  She even had a spectral cub pet!  /drool


For fear of sounding ignorant, but I had no idea what a sweet and lovely person ACM was!  I guess I was expecting someone a bit hardass who was a little wary of the unknown, who was guarded of her privacy especially around strangers.  But what I found was someone who was not only warm and enchanting, but who had come through a difficult time in life to be friendly, enthusiastic and welcoming to another blogger, and happy to share a little of herself with me as I shared a little of myself with her.  So THANK YOU, Apple Cider Mage, for allowing me to visit and take a pic with you :)  And for being totally understanding of my SQUEEE for meeting someone that I find so inspirational.