Gifts that move you

It's one of those funny things. Today it was not only LBR day and I could actually attend for a while, but it was a horde one too, and it was Firelands.  I like Firelands, so I went along and JD was being a bit strange.  He told me to go make a toon on his server - but I already had one because I used it for the Navispam of him.

JD gave us all a present.  I had that dreadful sinking feeling.  Is he leaving the game??  I had that dreaded feeling that it was one of those "Farewell folks, it's been great playing with you, here's something to remember me by," gifts.

He told us not to open it yet.  He wanted us to open it at the same time.  And then he said "OK... now!"  and there were gasps all around as we all had gorgeous panther mounts.  I was... astonished.  Humbled.  Thrilled.  Grateful.  And then I realised...

I would have to level a toon on this realm.  Then came the feeling of dread.  But I won't let that get in the way of my beautiful gift!

So here is everyone with all their gifts :)  And a teeny tiny picture beneath it with our names so I can remember who everyone is. 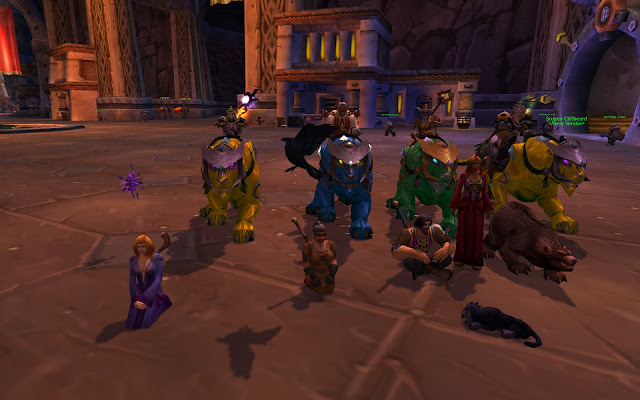 After that we all went to Firelands.  Beth'tilac went down nice and easy but I had to pike after that and head out.  They all got up to Rag, so that was fun for those who hadn't seen Firelands.  Arvash turned up to do some leet tanking, thanks to some convincing from Repgrind.