I was so excited I could hardly sleep.  I was up from midnight researching weather and writing and thinking about what I would do if the weather was bad for the eclipse at sunrise.  I finally lay down at about 330am and the alarm went off at 430am and we packed food for the kids, the cameras, beach towels and headed down to Four Mile Beach at Port Douglas, which is directly east facing.

Of course, we weren't the only ones with that idea. 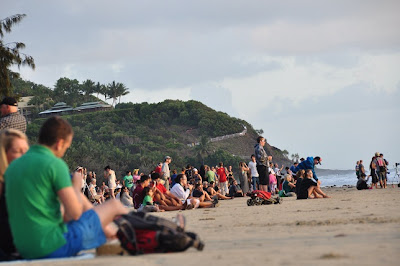 The beach was full of people but there was plenty of space for everyone.  The tide was coming in as well, so we kept ourselves way back from the water, as we watched the horizon for sunrise.  Channel 7 was there somewhere too, and we saw the helicopter fly past us filming the crowd after the eclipse.

The beginning of totality occurred behind a cloud.  The sky darkened, the stars became visible and it got cold.  I whooped even though I was disappointed that I was going to miss the eclipse because of stupid CLOUDS, because the whole experience, with everyone screaming in excitement around you was pretty awesome.  But then, halfway through totality, lady luck shone on our side and the sun began to move out from behind the cloud...


So exciting!  So lucky!  I was thrilled, and the kids even got to see the black sun.  I think they were fascinated by totality even though they didn't understand it - Hyad was explaining it to my daughter and she remembers that the sun was black and it looked like a moon.

We headed out to Mossman Gorge to have a look - there are some walking trails and you can also swim in the water there - crocodile free! 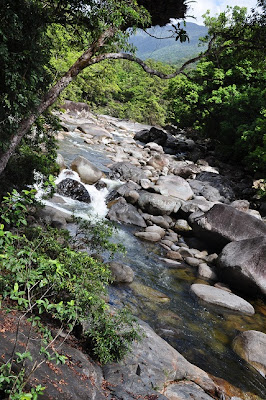 After that long walk and letting the kids play in the water up to their ankles, we went on a bird tour with Del Richards of Fine Feather tours which I admit I was a bit concerned because of the kids!  How were we going to keep them quiet?  What about walking?  I am not carrying the kids... sigh, if it was just me and Hyad and Eddings, then we could go on longer walks.  Anyway it turns out we just get driven everywhere in a 4WD and just hop in and hop out of the car.  Much easier!  Except the kids got cranky and restless and noisy during the trip, though were often pacified by drinks, cruskits, rice crackers and chocolate.


So this is what I pet battled today...

Greater bowerbird and his bower (nest) 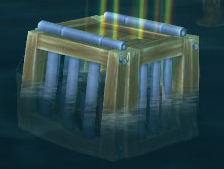 We were buggered after that.  Hot, sweaty, sticky, covered in dried sunscreen and insect repellant - I was looking forward to getting home and having a nice hot shower.  We had mexican for dinner and I put the kids to bed and crashed... until midnight.  Now I'm up again!  Tomorrow we will be doing the cable car and steam train ride (a very kid friendly day, unlike today!).
Email Post
Labels: AFK wow addict