Revelations to me about Pet battles and Rares and Uncommons

I have been going through the achievements for pet battles and only figured out just now some things about pet battles which weren't quite clear to me before.

One of them was about rare pets.

When I was battling the other day I caught a rare.  It was a chicken.  I couldn't understand how that could be rare!  I mean you see chickens all over the place, right?  I just thought it meant chickens were rare in that area making it rare.

But actually, the pets themselves have quality, just like armour and weapons.  For the same type of pet, they have grey (poor), white (common), green (uncommon) and blue (rare).  There are of course rare spawning pets, and I hope they are rare quality as well (because it would be really crap to battle with them otherwise).

As a general rule of thumb I look at the stats.  If the attack power and speed are less than ten times the level then it usually means they are pretty crap.


Everyone has their own way of levelling, but I was trying to level a few together, especially my rares.  Aza is kicking ass with just ONE thing (his Grell, which is pretty cool!) and hasn't really levelled others I think.  He did the whole of Kalimdor tamers with the one pet!

So now that I know what a rare looks like, I have been trying harder to capture those with good stats.  I'm now up to 8 rares!

You get a Feral Vermling as a reward for 250 pets.  I was worried because it wasn't showing up in my Pet Journal or my mailbox but I found you have to hit ressurect/heal all pets and it will appear in the journal. 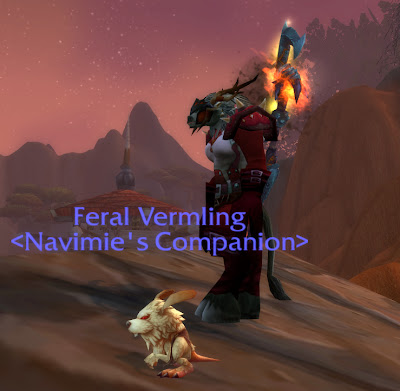 I haven't started properly camping rares yet.  I have been to Wetlands a few times trying to get a Tiny Bog Beast, both day and night but I haven't seen one yet.  And also, I went to Arathi Highlands to get a Tiny Twister, and I went at night, as some comments said it only spawned at night, but I got mine during the day.  There were none at night.  There were a quite a few there during the day (and a few people as well).  I was pleased to get my Crimson Moth today - it only seems to spawn as the second pet that joins in a battle in Cape of Stranglethorn.  Twice I've seen it in battles in the Cape, and I am glad I got it this time.

The Wowhead pet battle database is excellent!  It has clickable maps showing spawns.  Well worth a look!

And Cymre has a great guide to the trainers and also some of the rare pets that spawn too!
Email Post
Labels: Achievements pet battles pets