Now Chatmay did not choose me to mog her, but nobody seems to be making her mog for her, so I didn't want her to feel like nobody cares about her.  So, just so she knows we love her and think about her I thought I'd make her a mog.

Shoryl was the original perpetrator of this Meme.  It's gone to a few well known mog artists since then, you can see the list when you go to Shoryl's original post.  This is what Chatmay wanted:

Chatmay is a longtime resident of Stormwind City and war veteran.  She is known most of all for being a social butterfly and party hostess extraordinaire.  Rebel and wild-child in her younger days, she has mellowed out a bit in her middle-aged years, but she still knows how to have fun.  And even though she is known as friendly and outgoing in public, she occasionally makes a statement that it is not to be forgotten that she is a warlock.
Chatmay usually wears robes and loves ones that expose midriff or back.  Pants/tops are ok as long as they are stylish.  She rarely wears helms that show the neck but hide all of her hair (ew), but she does like hoods and masks.
Chatmay has recently acquired a dagger called Runesong Dagger, and is looking for something to wear with it.  She won the dagger when greatly outnumbered, so she wants the outfit to be a reminder to everyone – don’t mess with me.

So here I go!  Finding a dress was easy, but shoulders was hard!  I didn't want to use a full tier/set piece look.  I am not a helm or cape fan, and the choices of helm I would like are not what Chatmay would like.  There seems to be a large amount of PVP gear in this mog though.... 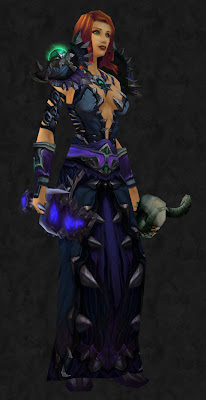 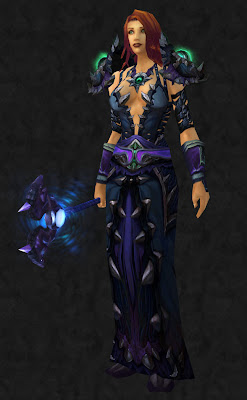 I like Chatmay's original offhand in the picture she showed (Swampchill Fetish) so I kept that for the "don't mess with me I'm a warlock" look.  And the wand that I would put with this set is Wand of the Netherwing.

Wowhead is broken atm :( it's having maintenance!  I'll fix the links tomorrow when it's back up.

I hope she likes it.  All those spikes are kinda scary!

Edit: Ok, Shoryl says I need to continue the meme!  So I choose JD of Amateur Azerothian, and this is his challenge:


Navimie is thinking about being a bear tank next expansion, and wants to look big and tough like a warrior.  She would like a full faced helm like a warrior and look like a tank when she's not in bear form, and Mask of Lethal Intent looks like it fits the bill nicely.  Tanking weapons tend to be staves, so the mogged weapon has to be a staff.

I look forward to seeing what the Simon Cowell of Azeroth comes up with :)