You know, I could read this NBI thing all day.  This Syp guy really got a community thing happening here.  I don't even think I could get through it in a week of continuous reading.  I signed up as a sponsor, but maybe I'm not big enough to be a sponsor!  It says I should write 3 posts this month about the NBI, and trying to help new bloggers.  And that's the hard thing, I think.  How do I go find a new blogger to encourage them to write?  I'm not famous enough that they come to visit me, but I guess the next best thing I can do is go to some of the quiet ones and encourage them to participate in some of these community things. 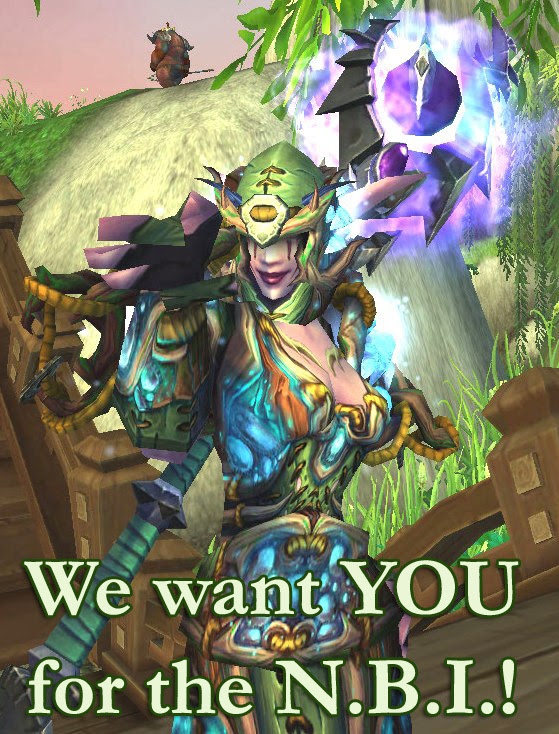 One thing I did discover was this blog Tastes Like Battle Chicken.  I think I've seen it around on some of my friend's blogrolls (Angelya is the one I remember) but the author, Ambermist, has been heavily involved in NBI and been putting out some blogger challenges.  Look at her awesome poster here for NBI!  She has asked us to submit all sorts of things, from pictures about Why we WoW, to a series of challenges every week for NBI.  It looks like fun!  It's probably for newbies, and perhaps I should drag some newbies out to join in and put your replies on Battlechicken's blog, but surely that means I can play too right?  Maybe if I'm lucky, some new blogger might read it and want to join in!

The challenge is this: Tell me about your main character(s).
This might be their backstory as you’ve imagined it, or how you imagine their personalities. It could be how they relate to you–are they your flamboyant side, or do you channel your thoughtfulness through them?  Maybe explain why you chose them or why you keep coming back to them. What would they say if I asked them to tell me about themselves?

Navimie, my dearly beloved Tauren Druid, is like an extension of myself.  I interact in the World of Warcraft through her, and her personality has aspects of my own - she is friendly, chatty, and acts like a motherly figure for those within her guild, Frostwolves on Dath'remar.  But it's a bit redundant coming from me, I think it's best if we ask Navi to tell us a bit about herself. 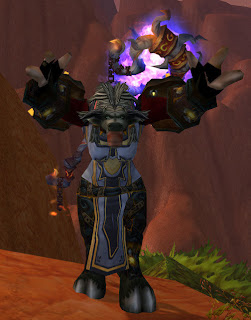 Oh, I get to talk?  This is new.  I'm not sure if I like this, this kind of behaviour is a more for those Night Elf druids, who can be somewhat emotional and temperamental - like that Catwynn, who seems rather prone to sulks and running off and doing all sorts of contrary things.  Taurens are not very talkative... but I'll do my best.

So, what can I tell you about me?  Well, I can tell you I wasn't always this motherly figure that everyone ran to for advice and complaints. I don't think I was much of a big team player when I was a young Tauren.

In your so called "human" years I am almost 7 years old - I think my "birthday" is somewhere in September.  However, I am played with extensively by my creator, and have clocked up almost 360 days, and when my creator says I reach 365 days she will write a really long blog post about me.

I grew up with 3 other young shu'halo (that's what we Tauren call ourselves) - a warrior, hunter and a shaman, all born in the period you human players called "Vanilla".  As children we played together and learned the ways of the land and how to hunt and kill effectively as a group.  We learned from experience back then, we never read about what others did.  The shaman and I would take turns healing and the warrior would be our tank and the hunter was our main damager, with her pet.  But of all our adventures, there was one which I thought was particularly trying - and that was Scarlet Monastery.  We 4 spent about 4 hours in there, trying to get through just one side of the instance, I think!  And the rewards we got were so shiny, I remember being in awe of all these great items that dropped inside.  We were so young then!  We knew nothing about the bosses in there, or about any strategies to do anything, we just kept trying and learning at our crazy kamikaze pace. 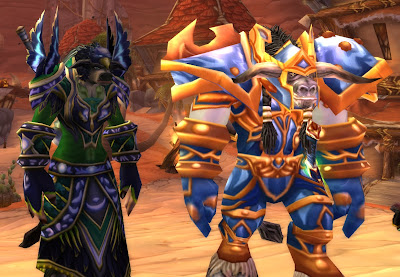 It was around level 50 I started to get a thirst for player versus player combat.  The 50-59 bracket was hugely enjoyable and I wished I could be level 59 forever.  Back then I would run with the flag and shapeshift out of snares and slows and heal myself if I needed to.  And then, one day, I was all grown up.  I was level 60.

Things changed.  Battlegrounds weren't as fun, I just kept getting smashed all the time, but that slowly changed, because the more I went, the more armour I could get, and it made me not so squishy.  And then I made some friends, and we'd go to Strat and Scholo and UBRS while we all tried to get our Dungeon sets.  Wildheart was mine, and I seemed really proud back then parading around with that dead bird on my head, and wings on my shoulders.  I saw people running around with purple gear, epics, and I had my blue gear, and back then, having purples was really special.  It meant you were doing these huge hunting parties of 40 people and killing creatures which took a huge cooperative effort.  I never thought I would be one of those people.

I have been in 4 guilds in my lifetime.  The first, was a low level starting guild, and I think when I was level 40 was when I got invited to go in there.  I met a couple in there, a tauren druid female and an orc warrior, and they broke off to start their own guild. I followed them, taking my childhood friends with me.  But when I started doing a lot of these dungeon runs with other players, I left that guild to join with these people who were running those dungeons, as I had been spending lots of time with them.  They were in a different timezone, and they played at strange hours, but it was nice to have different friends.  In this new guild, I met a male Tauren druid who became very friendly with my childhood hunter friend, and they eventually went off and started their own adventures and stories, and now with different characters, that you can read about here.

My childhood warrior comrade was my betrothed, and soon it was just him and I.  In the evenings, we found that there was yet another guild doing these huge hunting parties, these raid runs, and they needed more hunters and healers.  We followed along for a couple of them.  And we found that at lot of these people played at the same time as us because we were all in the same time zone.  And eventually, after a lot of convincing, we left our other guild and joined this one.  It was called Frostwolf, and it is the same guild I have been with ever since then.  The name of the guild changed when we moved servers, but the core of it remained the same. 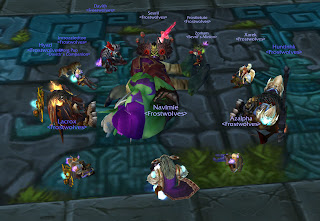 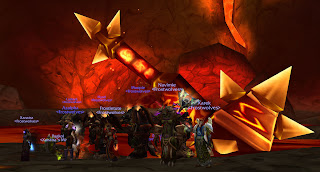 I was, even then, a difficult healer.  I didn't want to do what everyone else was doing - I liked my hybridness, I had half my talents in the feral talent tree to have  Heart of the wild for the intellect boost, and the rest of my talents were in the healing tree.  Even when I was encouraged to go tree, I refused.  I didn't like the thought of losing my wild side.  And tree back then was about as useful as Spiritwalker's Grace would be to a druid - sorry, Shaman joke :)

We were doing more large hunting parties then, but mostly the ones that weren't the ones that the "high level" guilds were doing.  We doing things like Zul'Gurub and AQ20, which were great for a guild our size.  And I never thought I would go into those instances where you get "Tier", raiding already was a new and fun thing for me, the whole cooperative group thing was so much more satisfying than a battleground! 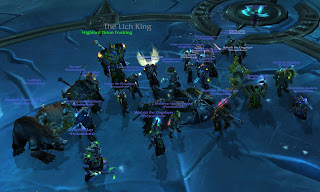 I can't remember when my guild rank was elevated to that of an officer.  I don't even know why I was chosen.  Perhaps it was my level headedness and sense of fair play and guild loyalty that made it happen.  But I know that since then my resolve to stay and make my guild strong, successful, and a fun place to be never changed.  The Earthmother had allowed me to be chosen for this role and by An'she I was not going to fail her. 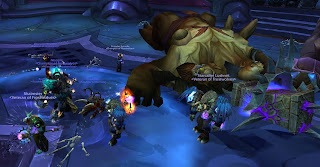 It amazes me that I enjoy these hunting party so much.  Taurens are not bloodthirsty.  I don't even really like killing for quests.  But somehow, I think it's those orcs who are part of my guild - their bloodlust and love of warfare must be rubbing off on me.  It only happens when I'm grouped up - how interesting, I have horde mentality. LOL.  Double pun intended!

It's funny how back then I wouldn't give up my feral side, and now I prefer to be a fulltime healer.  I have fought so many of our foes - Ragnaros, Illidan, Kel'thuzad, The Lich King, Nefarian...  Who would have thought that I, a humble druid hailing from Bloodhoof Village, would be present at such monumentous battles?

But that's my life story.  What do I do when I'm not battling?  I love to fish, and I dabble in a bit of screenshottery.  I prefer the peace and quiet of a still lake to a loud goblin dance party.  I'm not a big fan of crowds - my favourite spot is atop the hidden shrine in Orgrimmar, where I can see the comings and goings of those around me, and I can see almost all the way to Razor Hill.  Oh, and I'm a tailor, so I appreciate nice clothes too, as well as vanity pets.

I hope I didn't bore anyone with my story.  But thanks for listening.  It's a tale I've never told in full before. I hope that I have done my family proud, and one day the tales of my achievements will be told after I have joined the spirits of my ancestors.

Wow, that's the longest I've ever seen my druid talk.  I think she went a bit overboard... I thought Tauren were supposed to be silent, almost brooding.  Thanks Navi!
Email Post
Labels: blogging Navimie NBI