It was really exciting thinking about all the beautiful (and maybe not so beautiful) sets that we were going to see today.  It was quiet to start, and our guild staked out one side and plastered it with our banners.  Great guild turnout to see those of us who had entered this transmog competition.


But everyone is always late to a party, and it wasn't long before the place was packed out!  There were the usual idiots standing around in the middle blocking views, but the event didn't kick off for a good 15 minutes.  I saw Noelani standing in the corner, and Ironyca turned up too a bit later.  Elvine was there too so we could see the Livestream as well!  Only Keelhaul was missing (he was out with the kids he tweeted) or the whole WoW Factor would have been there. 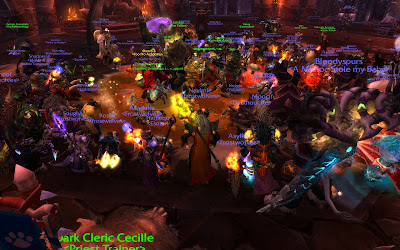 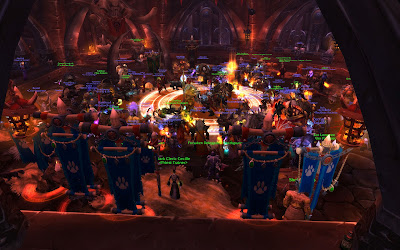 So a fair few of us got handed 500g for turning up, which was pretty exciting.  I even got 2 lots of 500g, even though I said that I had already received some.  I even tried not to take it.

Souglyy caught their eye straight off!  She was a clear choice for 20k and they loved her shoulders, her bow colour matched perfectly!  We were all thrilled as we've always loved her set, so that was really fantastic!  Pity they couldn't see her pet, that would have taken the cake!  They went back to her a lot, and when she was on the Livestream we were on vent going "Baha they're looking at you!!! OMG they love you!"  They even mentioned that draenei on one of the previous WoW Factor Shows who was wearing the Steadfast set too, and we all thought Baha looked better because she matched more!


They had a look at Roshii too, saying that he looked great, but his weapons let him down.  He had his legendaries on.  Roshii changed to his Warglaives and they came back to him and one of the judges (I couldn't tell who the judge was - I assumed it was Noelani) said "Did she have that before?  How did I miss those massive warglaives?" and he got 5k - WOOO!  But him not wearing a cloak let him down I think.  I've always liked that set with the Warglaives - it doesn't look good with the Cata legendaries.  A shame they couldn't see it with the Corrupted Hippogryph because it is an amazing match.


And they came to me!  They liked my shirt - they seemed to think that it went really well with my chest.  However, they didn't like my staff - it was too blood-elf Sunwell like.  Ah well!  But I got a 5k out of it so that was exciting!  They made some nice comments about my attempts to match my colours of the gloves and my chest and the cloak.  It makes me giggle a bit about the shirt.  I forgot what I was making and accidentally made the Green martial shirt instead of the Green Workman's shirt.  And oof, that was a bad bad look.  They were the same mats!  And they both had green!


Barkhoof also got a 5k for his mog too!  They liked his mix of feralheart and current tier so that was really exciting!  Our guild really cleaned up this competition. 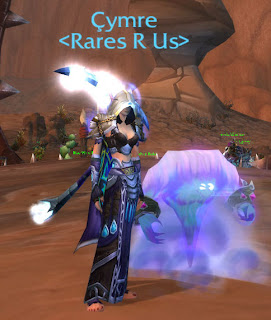 Cymre also got a 5k too.  They were a bit let down with her shoulder and helm for some reason but I did like them.  It was like a holy grim reaper look.  I actually love that hood.


A priest by the name of Silenrea was really good with her angel set.  She had a halo on her set, and there was a BE male I think with the same sorta look and they both got 5k.  Sev said later to me that he was hoping they didn't over look her, because she looked really good. 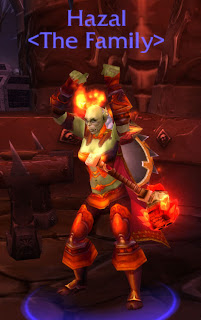 Hazal, an orc shaman, with an eyecatching red skimpy gear with a really scary face was also targetted for 5k.  We noticed her at the start, and I even went to look at her to take a picture before the contest started.

There were two rogues wearing druid stuff!  Ut, a Blood elf, was wearing the same helm and kilt as me but was wearing the rogue FL shoulders which look like bird heads which I like a lot, and also was wearing a grizzly jerkin which looks sexy and demon hunter like!  And the other blood elf rogue, Leleli, was wearing a blue set with the Druid Passive Resistor Spaulders and it was a good look.

There was Manahungry, this troll shaman near us that they seemed to like a lot - Noelani(?) really liked him!  He got 5k as well, and I really liked his shoulders and his weapons.  Trolls are hard, with that hunchback look.  At the end, they had 15k left, and they came back to me and him, and wanted to give us a bit extra.  I ended up getting 10k and he got an extra 5k, so that was exciting! 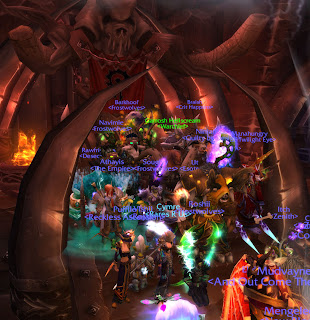 After that, everyone was called to go up to Garrosh's platform so Vishii could have a good look at everyone and make the 100k final decision!  Silenrea was whispering me telling me she liked my mog, and I thanked her.  I was actually busy typing my blog post and editing pictures when my headset went wild with people saying "Navi, it's you!"  I'm like "What?"  because with all the vent chatter, I couldn't hear the Livestream.  And it was no joke.  Vishii actually chose ME.  ME!  I was stunned.  OMG what do I say?  I said what anybody else would say...

And of course there was heaps of outcry.  I chose to ignore all the comments about how crap my mog was, and Roshii had one fanboy screaming he should have won or Souglyy should have won - I really thought Souglyy was going to win because I was even WRITING about it when they announced me as a winner.  OMG I was totally overwhelmed, I was stunned! 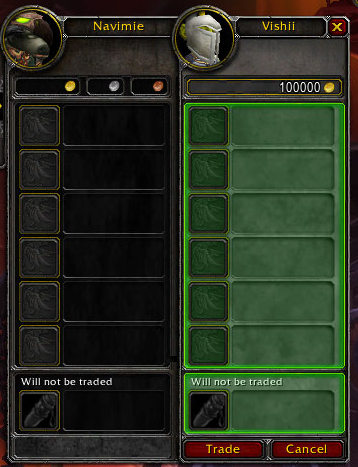 I have to admit it is so much HARDER to be the winner.  Because EVERYONE is going to look at you and say how shit your mog was compared to someone else.  Roshii told me later that there were some really horrible bad comments, and I didn't see them at all.  Probably because for every bad comment I had a whole heap of congratulations from lots of other people - many of the other winners.  And that was nice.  Focus on the good right, not the bad?  Roshii had lots of tells saying that he should have won, and I'm sure Souglyy and Ut did as well!  But for whatever reason, Vishii chose me, and I have to say a huge massive thanks to Vishii/Squalli and Rojak for organising this awesome event, it was so fun to be just there for it! Thanks to the judges for the highly entertaining commentary on the Livestream, that was really fun.  All of us were glued to the Livestream and screaming in guild and MOTD was going crazy!

So what am I going to do with 100k?  Well, I have no idea.  I did think about buying the LK mount... but I think I'll just hold onto it for now until some rainy day thing comes along.


Great work Frostwolves!  I wonder if we'll now get a reputation for being a fashionable guild? :D