The quest for Slut Leather

With all this transmog stuff around and all those sexy plate and cloth wearers parading through Orgrimmar, I said to Roshii I wanted to make a slut leather set.  "Nav," he said, "There IS NO slut leather.  It doesn't exist."  I scoffed at him.  Surely he was mistaken!  There are a few skimpy leather things around (harnesses etc) but they look very gladiator/battle like, unlike what the plate and cloth wearers have.  And being a tauren and orc, both of which are not known for their ultra supermodel sexy slim figures, we also had difficulty making those classic sexy stuff work.
So we decided to go and farm some of the skimpiest gear around.  And one classic, would have to be Warbear Woolies.  This can be made by leatherworkers and you've got to have decent rep with Timbermaw to be able to buy the recipe.
So one of the components of Warbear Woolies, funnily enough, is Warbear leather.  Which drops in Winterspring from the bears up there.  So late one night, Roshii and I went a bear hunt.
We farmed bears till well past 130am, and ended up with tons of rugged leather and thick leather and you should have seen us when Bountiful bags procced while skinning and we skinned 1 Warbear leather and procced another 3 Warbear leathers!  Up on the mountain there was this dwarf chair, looking over the Azshara.  I wondered why it was there.  I took a few screenies of the little lookout. 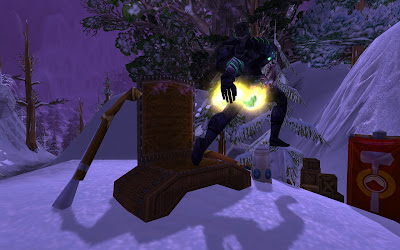 And there was a bear that was phased between Hyjal and Winterspring.  It drove us nuts trying to loot it.  My UI bugged out trying to loot it and I was stuck looting whilst sitting down.  I look like I'm doing yoga. 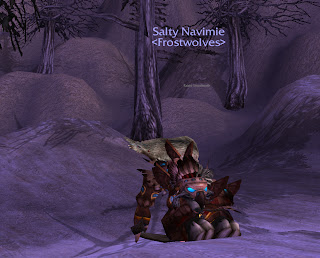 Roshii made us our Warbear Woolies and he also made himself the Warbear harness so we could both parade around in skimpy gear.  Though I still don't think it's slut leather.  Roshii's right.  We look more like barbarians than like sluts.  So maybe there is no slut leather, just SEXY skimpy leather.  The set looks much better on an orc than a tauren, so I am using my Prospector's set instead.

And here is us celebrating sexy leather.  Go Rogues and Druids! 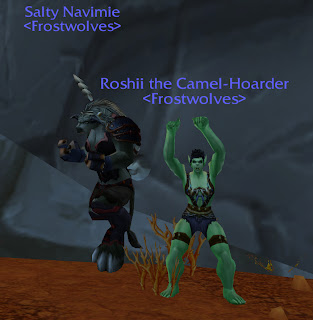