I did a naughty thing and stayed up late last night finish Searing Gorge quests.  And I have to say, that in that zone, the most remarkable and memorable thing to me was Lunk.

Meet Lunk.  He's a pacifist Ogre, who doesn't like you to kill things.  I first met him at Thorium Advance where I had to do the usual quests like killing spiders and some machines.

No!  You are the same as Thorium Brotherhood dwarf.
"Kill dwarf. Kill spider. Kill machine. Kill, kill, kill."
Lunk come to gorge to go on adventure, not to go on murder spree.
Goodbye, tauren. You kill too much.

Well, I didn't even get to talk to Lunk before he stomped off.  The Dwarves shrugged and said oh well.  But later, when I was doing another mindless killing quest (A Proper Antivenom), Lunk reappeared with the Lunk's Adventure: Spider rider, and showed us another way to get spider venom.

Lunk sees you like to kill things. Let Lunk teach you another way.
Lunk always wanted to ride on spider's back. Looks like fun. Spiders move too fast, though. Always slip away.
We work together. You fight spider until it gets weak and tired. Then Lunk jump on spider's back and ride around.
Maybe Lunk even gather some venom for you! No have to kill! 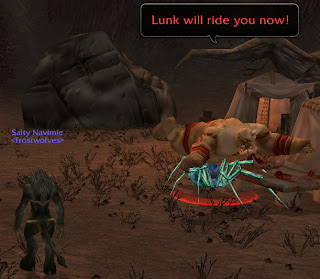 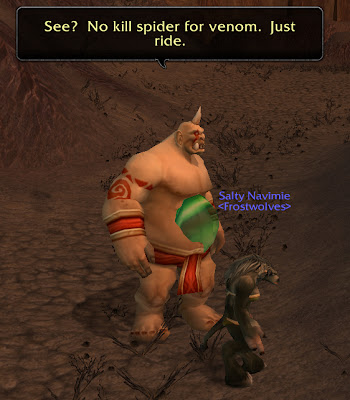 You have to scrape the venom off his tummy.  You even get twice as much venom that way!  But to weaken the spiders I had to take off all my clothes because I would kill them with one melee swing in my full gear.


And later, when I had Recon Essentials, Lunk reappeared again with Lunk's Adventure: Cranky Little Dwarfs where he would sit on the Dwarves to "put them to sleep" instead of killing them.

What you doing? Why you kill?
You need to get things from dwarfs? Ah, Lunk understand. Lunk have a better way.
Listen: you go fight dwarf, but do not kill! Just fight until dwarf get tired. Then Lunk will help dwarf fall asleep. Dwarfs probably just cranky because they don't get sleep.
Come on! Trust Lunk.

Some of the things said by the poor squashed Dwarves was hilarious. 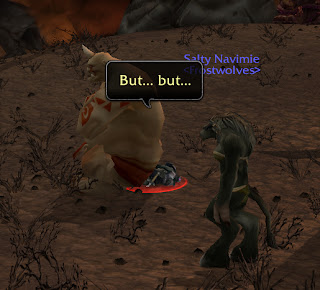 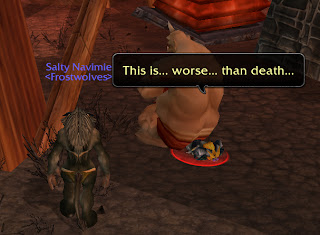 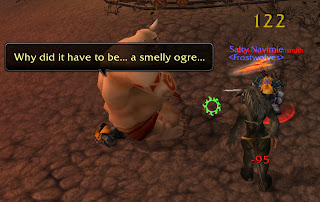 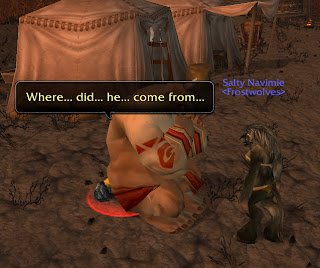 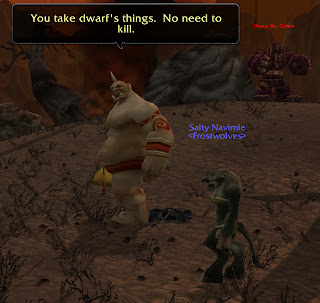 Later, Lunk makes another reappearance as we are trying to convince Rendan to join the Thorium Brotherhood's battle in Lunk's Adventure: Rendan's Weakness. 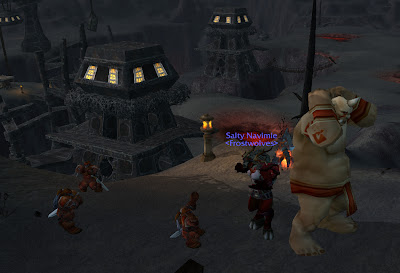 So there we are dancing away and Rendan is so impressed by us that he joins in the Brotherhood's battle.  He even joins us in the Cauldron with 2 female dwarves dancing beside him during the next lot of quests.


But I like Lunk because he had such a nice philosophy.  Why do we have to kill things?  There are other ways to achieve your goal without killing.  I liked that he showed other ways to us.  I am no rogue - I'm no killing machine - and it's obvious because when I come across rares I would rather look at them and take their picture rather than kill them, because I don't like mindlessly killing things.  I don't even like killing critters, like a lot of other people do (I contributed VERY LITTLE to our guild's Crittergeddon).

Interestingly, the attitude towards the violence of in game killing seems totally different from my attutide to violence in real life.  Going around killing fauna in game seems totally normal for material gain and loot, but in real life the whole idea is abhorrent.  And funnily, I have no problems killing critters in real life - I will gladly squash every single cockroach I see but I don't touch them in game.  Even my young daughter, who is 4, realises that you "kill" the bad red people in the game, but in real life you don't go around killing things you don't like.  It has made me think hard about this video game violence leading to real life violent tendencies.  Playing this game, with it's rather blase approach to killing things does NOT make me a mindless killer of innocent creatures in real life.  My young daughter is proof of that.  She kills all these dwarves, deer, scorpions, spiders and picks up the shinies but she doesn't go outside and stomp on every single ant or pull the wings off butterflies to get loot.  I think that all those anti-social behaviour types who go around playing violent video games and then go on killing sprees actually had tendencies to do that anyway - and naturally gravitate towards those sort sof violent video games.  If they didn't have those games, I suppose they'd be out torturing people's dogs and cats for kicks.

So Lunk, I'd just like to thank you.  You've reminded me that violence is not always the way to your goal, even in a fantasy game like World of Warcraft.  If only there were more NPCs like you :)

Oh, and you do get to see Lunk again.  He is one of the 40 random NPC protectors who will fly with you to help you in the daily The Protectors of Hyjal. 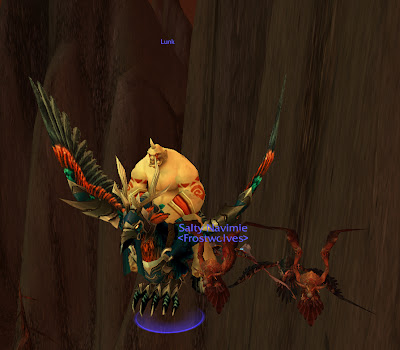 He flies in on a Cenarion Hippogryph. 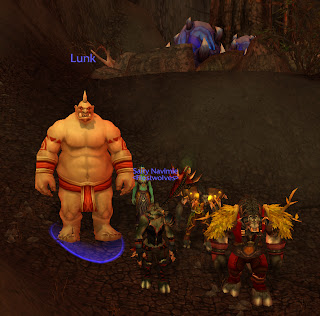 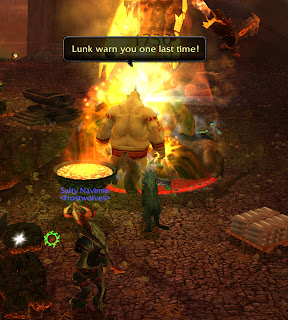 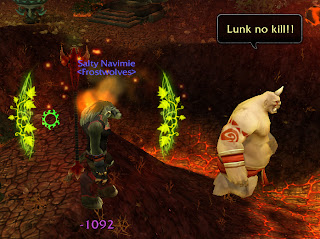 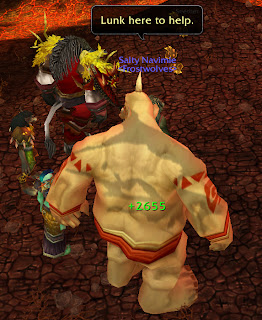 Yeah... Lunk says he is here to help, but his pacifism is annoying though!  He doesn't do anything to help you since he doesn't like to kill things...  "Lunk here to help."  yeah right.  NOT.  But, I still like you Lunk.  Navimie likes your style!  You're the best NPC ever!!!