So for those who don't know what I'm talking about it's Gnomeageddon's Sixth Meme.  That screenshot thing which started out as a simple post a pic chain mail but made everyone involved that there a HELL of a lot of WoW blogs out there.  Since then Gnomey has followed it up with a follow up post: The Devil made me Do It: A week of 666.  In which he showed my "work of insanity" and also Martha's anally obsessive tree of linkage.  Her list was just amazing.  I thought that my chart would be redundant.  But some of my friends did like the visual image, and I thought, and wondered what it would look like now.  I imagined it would be something like a tangled ball of wool, and I wasn't far off.

So, since you've been so patient, here was the Meme at 30 hours: 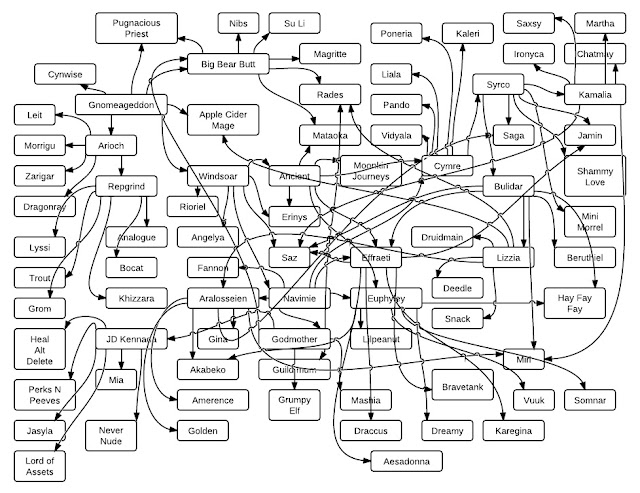 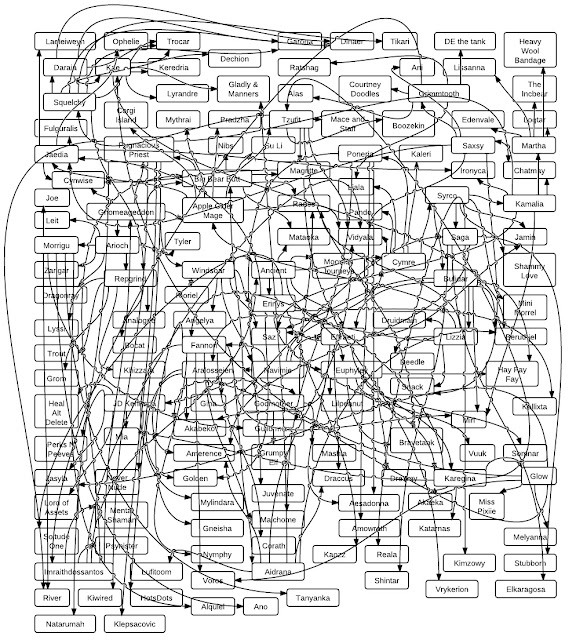 I can't even read it.  The middle bit is all blotted out.  I can just make out Godmother's name.  And underneath her, Guild mum (Sephrenia) is totally overwritten.  Rades is barely visible under all the crosses over, and same with Kae and Effraeti.  But there are a hell of a lot of bloggers out there... and there are still more who I've only noticed now.  Thanks to Martha, whose amazing tree I couldn't have followed it all without, especially in the areas that I dont' know so well.
One of my guildies said to me, why did you do that?  Do you even KNOW these people?  And looking at the list, I would say I would KNOW OF about half of them, or had heard of half of them.  The other half are new to me.
And there are still some bloggers who haven't been tagged.  That I know of anyway.  I am totally bamboozled.
But... I found out that Gnomeageddon is another Aussie blogger.  So the list of Aussie WoW bloggers is now up to 5:
Angelya
Saunder
Cymre
Gnomeageddon
and me!