As a resto druid in PVP, I get killed a fair bit.  People just have healer hate when they play for the other team.  But it was a few months ago when I noticed that I really was getting killed - A LOT.
Sometimes it was as if I had a huge bullseye planted on my head every time I started to cast a heal.  How can they see me behind all these other guys?  And you know what I had it all down to?  Good PVP tactics.  Take out the healer, and mow down the troops.  Steamroll your way to win.  That's assuming you have more punch power than the other team of course.
So why have I brought this up?  Because I used to think that battlegrounds with no healers were a loss for the other team but then I read this written by Gnomeageddon.  He talks about and advocates the use of the addon Healers have to Die.  I shouldn't even be writing about it here, because talking about it encourages its use and I don't like that addon.  However, on it's plus side it does put friendly ones on your teammates so technically you can assist your healers who are getting pounded on.  So now I know WHY I am getting pounded on as soon as I cast a heal. Bloody hell.
Cynwise wrote about it too, advocating its use.  Bloody dpsers.  I admit I have no PVP addons, but I'm not sure if I would use them because I get confused easily.  It's much easier for me just to focus what I'm worried about (mostly an arena thing) and just heal and run and hide and call out incs or whatever for the battlegrounds.


So do I think this mod should be removed?  Umm... no.  As much as I hate it, killing me is the smart thing to do in PVP.  And if my teammates use it as well, then we are all on a level playing field.

One interesting healer PVP read I did go to was this one at P Vee P - healer placements.  This person wrote a whole series on it.  Which I thought was pretty cool.   Do I agree or disagree with what they said?  It's not that I disagree exactly, but being the spacebar twitch that I am, I'm usually constantly moving around so I am rarely in one of the positions PVeeP said I should be in.  But the diagrams are pretty and it is a pretty good tool for someone who is new to healing a BG group.  And I mean group.  Not a pug.
Which will now bring me on to what I class I hate more than anything in an PVP but especially in Arena.  A death knight.  Now I find this interesting - there are very few DK blogs out there.  I suppose Rades is a DK, but really he has a hunter, a priest, a druid, a DK and a paladin so I am not sure if he qualifies.  He does have an outdated DK gear thing on his blog though - maybe that counts.

DKs just smash through everything in my arsenal.  They wipe off my Lifeblooms, they put bloody diseases on me that I can't dispel, they put me in iceblocks... chains are not so bad as I can shift out of those... they yank me back when I'm trying to run away... they use that annoying as hell death strike that gives them back a shit ton of health I mean WTF is with that SERIOUSLY!  And don't get me started on Anti-magic shield which lasts too long and can't be stolen and just totally stuffs up my Nature's grasp... GAH!  Hate them hate them hate them.  My worst nightmare?  2 DKs.  Add a shaman to that and I think I would rather be
Mages however, I do find annoying, but a good mage can be so painful.  However, I spend a lot of time practicing duels against my mage team mate Shaba, so I am reasonably well versed in escaping the sheep/tree/sheep/ROF/counterspell combo (oops did I just give away something?).  And I will always relive my glory moment of me being left in arena against a mage, who was being very cocky about killing me and after 4 minutes or longer of running around and stuff, I killed him.  HIGHLY SATISFYING.  Take that you little blinking evocating frostbolting pipsqueak!  I bet you were pissed off when I cycloned you while evocating!  Ha!  My mage dislike came from one AV I did back in Vanilla, and I had stopped to hit a mage who was hitting me and I was yelled at on the battlefield "Are you STUPID?  What the hell are you doing?  Druids can't beat mages, DERRR, get your ass up to Vann's room."  Ok, so like, yelling at me is going to make me do anything you say faster?  I don't think so.

Which leads me to another sore point in PVP.  Poor sportsmanship.  It drives me nuts when people are rude to me in a BG.  BG talk can be like LFR talk, it's full of finger pointing, hate and ego flexing and blame making.  Telling everyone how crap they are.  Just go away, I don't want to talk to you.  I try to write down every positive experience I get in PVP so that I can remember the nice times to cancel out the times I just want to reach into my screen and slap those egotistical twits until thier poor little buttcheek faces are sore.

And those people in arenas who laugh at you and spit on you.  Why must you do that?  You know I would really like it if someone came after me after a really challenging match and said "That was a great match, well done."  I admit I've done that before, I logged over to the server made a level one alt and told someone that the game we had was a really good game, and it was really satisfying.  OK, so I'm a big fan of the 45 minute arena match (where we WIN of course, but even when we lose it's a good game coz of the challenge) because outlasting and survival is what me and Sev are good at.  But the multitudes of times I have had opposing team make rude signs at me and spit on my corpse and laugh at it... ugh, it just drives me nuts.  I hate rude people. 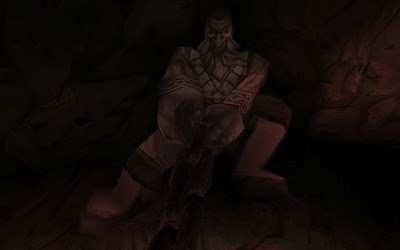 So for those who don't realise, I'm actually doing this post as part of Gnome's challenge, because Ancient wanted me to join her.

Challenge: Find one of my old posts from the 830 odd posts I have written and choose to agree or disagree with it. Compare life during TBC with life pre-MoP. Hate me, go on, hate me – ill love you for it!

There is one condition, with the exception of the initial link back to my inspirational post, all other links have to go outward and include at least two other people to involve.

Not that I ever have a problem with link love.  I have my weekly blogroll to do that.  But I decided the extra challenge today was to link to some people to whom I have never linked before.  But at least even if I only linked to people who don't really need the link love (Rades and Cynwise) I can say I got that PVP thing off my chest.  Never really found an outlet for it before.
Email Post
Labels: Arena Navi's thoughts PVP