My fluttering eyes snapped wide open.  Pink sky.  Wreckage.  What on earth has happened here?  I look around and my jaw drops as I catch sight of my hands.  I turn them over in front of myself incredulously.  Blue-black skin.  Smooth. No fur.  My hand goes to my head - the horns are still there but my hair is different.  I put my hand to my muzzle - and find a flatter, more human face.  I look behind and I still have a tail, and hooves.  But boy is my ass big compared to my shoulders.  I sigh in resignation.  I've been reborn - as an alliance Draenei. 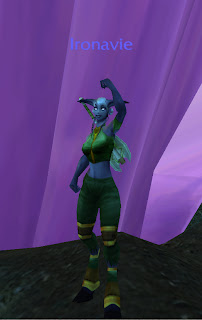 It came back to me.  I was being entered into the WoW Ironman competition.  And the rules were:

The following are allowed:


Now why would I, of all people be in this challenge?  Everyone knows Navi has no alts, hates levelling alts.  So why would she be in this one, which is even worse than levelling an alt, it's grinding your way the slow way to 85.  And the only way I would level an alt, I said once, was to do it with someone, in a group, and do it faster.
So what happened?  Why the change of pace?
It might have been the whole challenge of it.  It's different to level an alt this way.  And by the light, Navi is always contrary.  Trying to be different, to stand out.  Also, there is no pressure to level.  The problem with levelling with someone is that they're chomping at the bit to get going whilst you're still dawdling away on your main doing dailies.  And when I get left behind, I feel miserable and don't want to play anymore.
But, and this probably makes me the most concerned, is that I am jumping on the bandwagon.  Is it just wanting to get into the whole community event of it?  Giving me something else to write about - geez, it's not like I don't already have enough things to write about.  Sometimes I think this blog should be called The Twice-Daily Frostwolf.  Of course, a lot of that is ramble, but I love rambling.  It's my blog, after all.
But perhaps it's a good escape.  I think it's good for that 10 minute WoW time that we busy people have sometimes.  I can log on, do a few quests, log off.  And yes, I could do that with a proper alt, but there is always that pressure to level.  With this Ironman challenge, I don't want to be taking risks, I want to do it the slow scenic way... or I'll go splat.
So why did I choose:

So, here I am.  My name is Ironavie, and I have one life to live, here as a Draenei on Zangarmarsh server, and I'll be sharing that life with all of you, each painful step of the way!

Thank God, RealId is only a /r away!  Though friends can't help you with levelling, they can help you live through the boredom of running from place to place.
Email Post
Labels: ironavie ironman challenge