Glory of the Ulduar Raider (10 man)

My picture is not as cool as HK's and Cymre's because I wasn't in the middle... so I'm posting their pic! 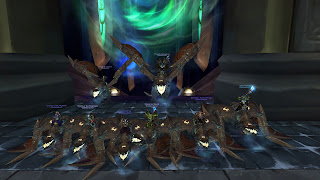 Done over 2 nights, I was admittedly sad because Cymre overtook me in achievement points because we did achievements they didn't have that I already had!  But I shouldn't really complain, after all, she does play more than I do!

Got some new achievements, like Rubble and Roll, and One (Two and Three) Lights in the Darkness, which gave us the Glory of the Ulduar Raider one.

We put Thorim up this time for Yogg (we did Freya last time) and we didn't have much improvement.  Phase 2 seemed painful and it took a while before we got the hang of that.  We only managed to clinch it when Lac went ret and went inside the brain with Maz, Sev and Shady.  Eboniee encouraged us to work around in a circle while we did the tentacles and that worked rather well too, instead of the random hitting stuff that we seemed to be doing in phase 2.  Sev said that we shouldn't have done Thorim because in Phase 3 it doesn't really matter anyway about the speed in which we get it down... but I am SURE that last time we did Yogg he said that we should have Thorim up instead of Freya.  Moo also said that Sev said it, I'll just blame it on Sev's bad memory.

Had a few looks at Algalon which was pretty hard, I still had no idea about it, but it would have been awesome to get that.

Unfortunately Aza had an emo because we didn't take him on the first night and since then he hasn't logged into WoW.  I didn't know he didn't have the achievement of I would have included him.
Email Post
Labels: Achievements Ulduar